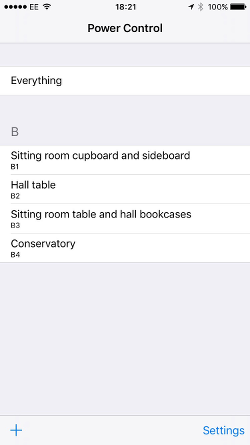 Power is an iOS app (for iPhone, iPod Touch and iPad) that allows you to switch domestic appliances on and off. The appliances must be connected to the electrical supply via Bye Bye Standby remote control sockets (or equivalent, such as Home Easy, Standby Saver, Brennenstuhl et al.). In addition an RF gateway device is needed, such as the Bye Bye Standby Online Controller. Alternative RF gateways may also work, but I haven't been able to try this.

The benefits, compared to the standard handheld remote controls, are as follows:

No information is collected by the app and no registration is required. Your usage of the app is completely private and invisible to the developer.

The RF gateway device listens for UDP packets on UDP port 53008, and depending on the contents of the packet will send RF commands to switch remote control sockets on or off. This is quite nice because from the iOS device we can simply send a UDP packet to the broadcast address, and the RF gateway will see it. Thus no configuration of the IP address of the gateway is required. However this does mean that the iOS device and the RF gateway must be on the same IP subnet; normally this is achieved simply enough using home WiFi router type boxes.

When you click an appliance on or off from the app, what it is actually doing, therefore, is broadcasting a UDP packet with specific contents. The RF gateway takes care of turning this into commands to control the actual hardware devices.

iOS 14.5 caused version 1.1 of the app to cease working because of the UDP broadcast: this now requires an explicit 'special entitlement' from Apple, which is built in to version 2.0 and upwards. I took the opportunity to add dark mode support and also synchronisation between multiple instances of the app via the cloud.

I've found that the RF gateway hardware is not terribly reliable. In my case I think that is due to poor soldering of the through-hole components. However, given that it is not possible to assure reception of either the UDP packet or the RF transmission, the app allows for each command to be sent multiple times by a single on/off selection.